Press play and read on.

I will begin with a definition and some history. What is a click track? It is essentially a MetroGnome. Sorry, that isn’t entirely accurate. A metronome is a tool that makes audible sounds (or visual cues) at intervals. Musicians use them to practice interval timing, memorize tempos, and play music along to the rhythm. To set the story straight, allow me to mention a brief piece of the history behind the abomination that has been the nightmare of many a musician.

History is fascinating and never fails to reveal entertaining (or bizarre) stories from the past. This is no exception. The mechanical version of the metronome was patented by a kooky inventor named Johann Maelzel who invented the Panharmonicon in 1805. What the hell is that? It is an automatic playing machine that looks like this. That’s right, before there was a drum machine, there was an entire orchestra machine! It could apparently simulate instruments and sound effects like weapons (guns & cannons) as popularized by composers like Tchaikovsky, Sarti, and Beethoven. It is possibly the precursor to a modern-day sampler workstation, only bigger. Much bigger. Did I mention that Maelzel managed to bend the fingers of Beethoven far enough to convince him to write a little novelty number titled “Wellington’s Victory” for this beast? While critics busted his balls over writing it, Beethoven retorted “What I shit is better than anything you could ever think up!” This wasn’t the only music Beethoven wrote for musical automatons while working with Maelzel. And, just like so many other “bands” throughout time, they had a falling out. Beethoven later described Maelzel as “a rude, churlish man, entirely devoid of education or cultivation.”

Yes, the colorful experiences of being in a band…but I digress.

Here is the problem. Maelzel nicked the idea for the metronome from Dietrich Winkel, who was also the inventor of the Componium, built in 1821. What the hell is that? It is an automatic playing machine that looks like this. Humble beginnings, right? It makes you wonder where the monkey is supposed to sit.

Now, thanks to Galileo’s research and discovery regarding pendulums as well as other technological advancements, there is now a wide range of metronomes/clicks currently available. For those firmly entrenched in previous centuries and older traditions, you can still purchase an “analog” mechanical metronome as well as portable digital electronic metronomes or the classic option of banging two rocks together. For those who prefer something closer to a 21st century experience, you can find many online metronomes or apps for your “smart” phones, tablets, etc.

Since this post is specifically about RECORDING drums with a click track, I should mention that it is common for the modern DAW (Digital Audio Workstation) to have a built-in metronome to generate click tracks. For those that do not already know, the typical reason you record with a click track is to attempt to perform at accurate tempos with solid timing as well as for having a reference for various tempo and meter changes. An example might be that you want to record a vacuous great rock song in common time (4/4) at 120 BPM (Beats Per Minute). Recording along with the click track can provide you with a reference (the click) to help you keep your timing steady.

Where does it all start? PRACTICE.

Did you see the episode of Sesame Street where Bert and Ernie show off their drumming chops?

With much practice, perhaps you will get to Carnegie Hall achieve the same level of timing mastery as Marco Minnemann. Here he is in one of my favorite drumming videos breaking down the timing of various audio samples and playing along with them. Notice how he also stylizes the phrasing to really tighten everything up. Yes, it IS impressive.

Did he say “Bite my shiny metal ass?”

If you are new to working with a click track/metronome, you may find it challenging. One of the most common mistakes at the beginning is to wait until you hear the click before actuating your note/sound. By then, it is already too late and you are behind the metronome. If you are practicing quarter notes in 4/4 at 120bpm with a matching click track and you don’t hear the click, you are either playing so loud that you cannot hear the click or you may very well be playing in time with the click. Make sure you practice at a low enough volume at first to get used to the process and can hear when you are in or out of sync with the click. The sound of the metronome should essentially “disappear” (or at least be difficult to hear if it isn’t too loud) when you are spot on.

I will NOT suggest cranking up the click track to keep up with any drum poundage as that will cause hearing damage.

Allow me to digress just a bit on the subject of loudness. The January 2007 issue of Modern Drummer had the following to say about the volume of various drums and cymbals. On second thought, let’s just skip it. I can summarize and just tell you that all of the decibel readings were between 102 – 125 dB. How loud is that?

The 1883 eruption of Krakatoa that was apparently heard some 3,000 miles away was also allegedly measured to be 180dB. Sure, that’s a big difference, but you were wondering why your neighbors hate you. Say, I wonder if anyone has tracked drums in a volcano?

If you will be recording with a click, I highly recommend that you rehearse with a click long before you enter the studio so that you are accustomed to performing with one. If you need to, seek out an instructor. A good teacher can make a huge difference in working through the stumbling blocks of learning.

Practicing with a metronome can help, but knowing how to practice with the metronome is also important.

Something that can help is to subdivide in your head. If you are trying to catch quarter notes at a slow tempo like 50 BPM, it may be helpful to subdivide into 8th or 16th notes inside your head.

You can play the metronome game where you listen to quarter notes at a chosen tempo, lock in your timing, then temporarily mute the metronome as you continue. Turn the metronome back on after a bar or two and see how close you are. This is easier to set up in a DAW where you can automate your click track. With this exercise, you are building the clock inside your head (so to speak). Speaking of exercise, here is a fun little test. It’s not perfect, but it’s a fun challenge. 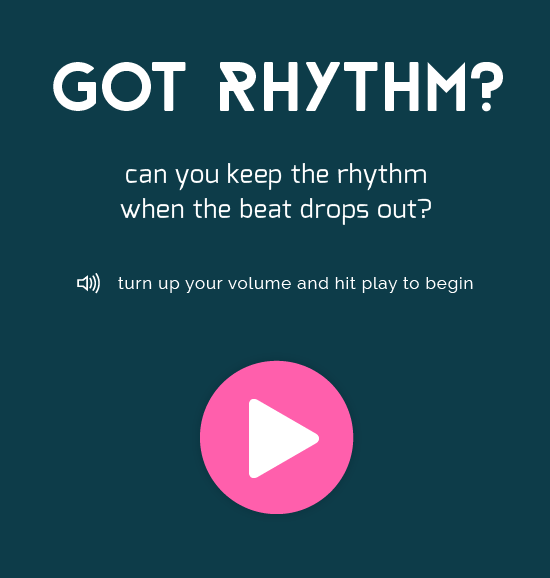 Consider recording your metronome practice and take note of any consistent problems. For example, do you generally speed up, slow down, rush leads/fills at the end of a phrase? Do you find that you anticipate the next beat to the point of jumping the gun? Or, perhaps you get lost “in the zone” and fall out of time?

Finding out what your weaknesses are will help you to pinpoint them so you can improve.

I should also mention that there are other reasons to record to a click track as well.

Here is a list of tips that may help once you are in the studio and ready to record with the click.

You may find that a click isn’t always necessary or appropriate, but when you do find yourself in need, I hope that this information is helpful in some way and that your recordings benefit as well.

Keep drumming, take care of your health, and enjoy the music!